Feeling stressed, overly tense, or having trouble sleeping? You might want to consider trying an ashwagandha supplement. Practitioners of Ayurvedic medicine – a holistic Indian system of healing – have long been privy to the incredible properties of this ancient herb. It’s said to have a heap of benefits including supporting your body’s stress response and helping to calm nerves.

But what actually is ashwagandha and how does it work?

Read on to find out.

Ashwagandha – also known as Indian ginseng, poison gooseberry, or winter cherry – is a leafy green herb but it’s the roots of this plant that are dried, ground, and consumed. And, although ashwagandha seems to be the buzzy new ingredient on everyone’s lips lately, it’s actually been around for a long time.

“Ashwagandha is a highly regarded plant used in Ayurveda, the traditional medicine of India. Its usage traces back to around 6,000 BC – where its properties were first recorded in the Vedas – a collection of the oldest known sacred texts of Hinduism,” says Wanderlust’s naturopath, Deanna Mascioli.

“In Sanskrit, ashwa means ‘horse’ and gandha means ‘smell’ which refers to the root of the plant having a horse-like smell,” says Deanna. Ashwagandha is also often referred to as Indian ginseng, botanically, ginseng and ashwagandha are unrelated. It’s thought the name Indian ginseng came about due to ashwagandha being used as “a rejuvenating and restorative Rasayana (tonic)” in Ayurvedic Medicine, explains Deanna. 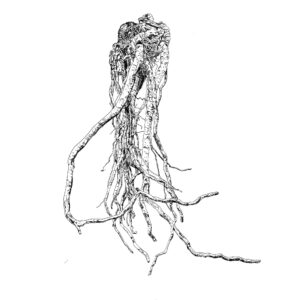 If you’ve been dealing with stress, nervous tension, trouble unwinding, or sleep issues, you might want to give ashwagandha a try. Researchers at the Melbourne Institute believe mental stress in the Australian community have doubled recently, so you’re not alone if you are feeling this way.

“​​As a collective, stress levels are on the rise. Given ashwagandha’s ability to help the body adapt to stress, support the body’s response to stress, relieve nervous tension and calm nerves, it makes sense that this traditional Ayurvedic herb has increased in popularity. Whilst we cannot always control or reduce the stress we are exposed to, we can instead focus on our body’s ability to handle what life throws at us,” says Deanna.

How does ashwagandha actually work?

Ashwagandha is an adaptogen and as you might guess from the name, these unique ingredients help us adapt by supporting how our bodies respond to stress. Clever! Deanna says traditionally in Ayurvedic medicine Ashwagandha can also: