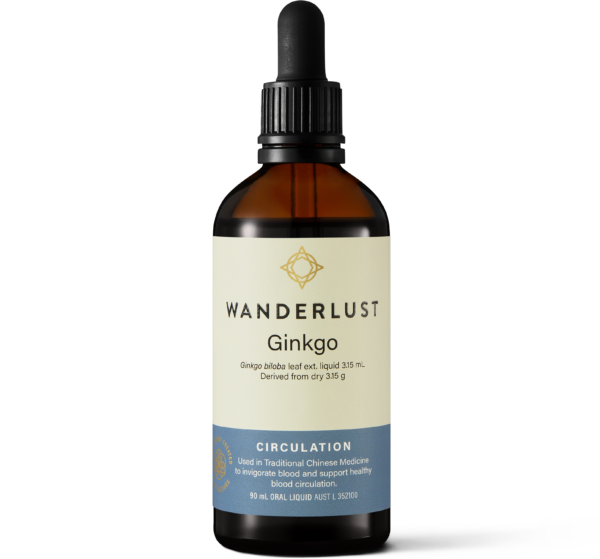 Using the measured dropper take 3.5 mL daily, or as directed by your healthcare practitioner. Drop directly onto the tongue or dilute in 30 mL of water or juice and consume immediately. Follow with a glass of water if necessary. Shake well before use.

We strive to harness the best from nature. We are dedicated to sourcing quality ingredients from around the world, selecting certified organic ingredients wherever possible.
Ginkgo

Native to China and now grown throughout the world, it is revered for its beautiful fan-shaped leaves and edible seeds.

Having no living relatives, it is believed to be biologically one of world’s oldest living tree species, earning it the name “living fossil”. It is also a dioecious, meaning there are both male and female trees.

Its botanical name is derived from the Chinese word ginkyo meaning ‘silver apricot’, which refers to the fruit’s silver bloom, and the seed’s size and appearance resembling a small apricot.

This plant has been used in Traditional Chinese Medicine to:

Traditionally:
The Chinese culture has admired the ginkgo tree for centuries. Its prominent fruit is considered a delicacy for food and medicinal purpose. It’s been revered as a sacred plant and as such, nicknamed by the Chinese as the Ancestor Tree, Buddha’s Fingernail Tree and Eyes of the Cosmic Spirit Tree. It was also a tributary item offered to the Imperial Court, to be used in the Emperor’s banquets.